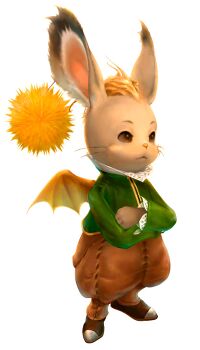 Montblanc (モンブラン, Monburan?) is a Moogle who has appeared in a couple of Final Fantasy games, with his main appearances being in Final Fantasy Tactics Advance, Final Fantasy Tactics A2: Grimoire of the Rift, and Final Fantasy XII, all set within Ivalice. In each of these games, Montblanc is the leader of a clan. He has five siblings—Nono, Hurdy, Gurdy, Horne, and Sorbet—and is the eldest of them. Montblanc has a short streak of blonde hair, distinguishing him from other Moogles.

Montblanc's name may be a reference to either Mont Blanc, the highest mountain in the French Alps, or the dessert of the same name.

In Final Fantasy Tactics Advance Montblanc is a supporting character and the first character to befriend Marche during his first day in Ivalice, after saving Marche from a run-in with some offended Bangaa, and offers him membership in his newly formed clan, Nutsy. He provides tutorials to Marche throughout, such as how to Engage. He even helps his brother Nono out of a jam once.

In Final Fantasy XII, Montblanc is the leader of Clan Centurio, who is responsible for supervising Vaan's clan hunt progress. He also seems to have a wide affiliation with other guilds and organizations around Ivalice, such as his sister Gurdy, who runs the Chocobo stables of the world. It is his desire to not only see Clan Centurio as the most prestigious of all clans, but to avenge his master's death at the hands of Yiazmat.