List of references to Final Fantasy in other media

This is a list games, web comics, anime, western animation and more that have been referenced in a Final Fantasy game. 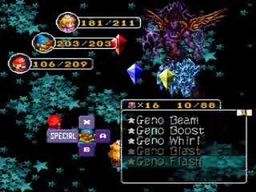 Super Mario RPG: Legend of the Seven Stars screenshot showing a boss fight against Culex, who is based on Final Fantasy bosses.

Super Mario RPG: Legend of the Seven Stars was developed by Square. There are several references to the Final Fantasy series:

In the episode "Rodigitti" of Robot Chicken, Cloud, Tifa, Yuffie, Barret, and Aerith were cast as workers and Sephiroth was cast as the manager of a fast food restaurant. Cloud (using his Buster Sword as a kitchen knife) and Barret (with his Gun-Arm replaced as a spatula) are chefs, Aerith works the register, Tifa and Yuffie alert the others to the beginning of the restaurant's rush hour, and Sephiroth (accompanied by a full-orchestra parody of his One-Winged Angel theme song, in which the "Sephiroth!" choral lyric is replaced with "Hamburger!") is the manager who suddenly appears at the door and forces Cloud (who has Lakers tickets) to work on Saturday. They battle, Sephiroth uses an attack called "Unpaid Overtime!". Cloud uses "Ultimate" which causes a giant meteor to smash into the restaurant, destroying it.