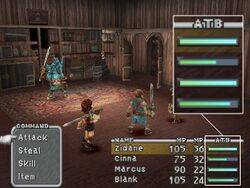 There are deciding factors for the speed in which the gauge is filled. Stronger abilities result in the gauge taking longer to refill than normal attacks. Other factors include how high a character's Speed stat is or the Battle Speed setting. If a character is under the effects of Slow, their gauge fills a lot slower, although Haste causes it to refill a lot quicker.

Another common element in the Active Time Battle system is how the battle started out initially. The first of these was the "Preemptive strike", which gives every party member a turn without interference from an enemy, meaning that their gauges are already filled up. The second was "Back attack", which gives the enemies a preemptive strike and causes the Active Time Battle gauge to fill slower for each party member during the first round. If an Active Time Battle system in the game allowed for characters to be in a front or back row, every character's row position was reversed (all front row characters were in the back, and vice versa). A third was side attack, which the player's characters were split up into two groups that attacked the enemy from both sides. Not only did the player gain an extra turn, but physical attacks do more damage if the player attacks an enemy that's facing away. The last one was "Pincer attack" or "Attack from both sides", in which the enemies face in different directions, giving them an advantage.