Red XIII is a red lion-like beast of an unnamed species who makes his first and major appearance in Final Fantasy VII, and has appeared in a few other titles in the Compilation of Final Fantasy VII. Red XIII is notable for being the only quadrupedal party member in the main Final Fantasy franchise thus far. Red XIII has the speech capabilities of a human and an intelligence surpassing theirs. 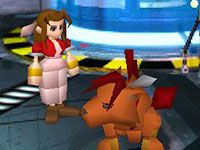 In Final Fantasy VII, the party first encounters Red XIII in the Shinra Building, where Professor Hojo is attempting to mate Red XIII with Aerith in order to preserve their species. When Red XIII begins to show aggression toward Aeris, Barret reacts by shooting the tank, causing it to malfunction. Hojo opens the tank, and Red XIII lunges at him as the party rushes to rescue Aeris. Red XIII introduces himself to everyone, surprising them with his ability to talk, and states that Red XIII is not his real name but rather a moniker given to him by Hojo. Red XIII joins as a party member, agreeing to accompany them up until they reach Cosmo Canyon.

At Cosmo Canyon, the party meets the village elder, Bugenhagen, whom Red XIII refers to as his "grandfather." Here, he reveals to them that Red XIII's original name is Nanaki (ナナキ?) and that although Red XIII is 48 years old, it is the equivalent of being 15 or 16 in human years. Red XIII reveals himself to be the last of his species. Although he fondly remembers his mother, Red XIII is angry over his father, Seto, whom he calls a coward who left behind his mother and the people of Cosmo Canyon when the Gi Tribe attacked. In response, Bugenhagen invites Red XIII and the party to enter the Cave of the Gi, where Red XIII learns more about his father.

While traveling through the cave, Red XIII learns that Seto actually fought the Gi Tribe when they were attacking Cosmo Canyon by way of a secret path. After defeating the boss Gi Nattak, the group exits out from the other side of the cave, and a petrified Seto is seen on a nearby cliff. Bugenhagen explains that Seto managed to fight and defeat the Gi Tribe by himself, protecting the people of Cosmo Canyon, even as they fired poison arrows into his body, turning him to stone. Having learned the true story of his proud heritage, Red XIII, with some encouragement from Bugenhagen, feels confident enough to accompany the party for the rest of their journey.

After visiting the Forgotten Capital, the party can return to Cosmo Canyon, where Bugenhagen, who has lived to the age of 130, is lying on his death bed. Before passing away, Bugenhagen says that Red XIII may yet discover a mate, suggesting that Red XIII is not the last of his kind.

In an FMV showing the epilogue to the game's ending, set 500 years later, Red XIII is an adult, and he is running with two cubs. This strongly suggests Bugenhagen's prediction to be true. Red XIII and the cubs jump onto a cliff overlooking the overgrown ruins of Midgar, and he lets out a vast roar.

In Before Crisis: Final Fantasy VII, when the Turks arrive at Cosmo Canyon, Nanaki is captured and taken to the Shinra Building to be experimented upon. He is given the codename Red XIII while Professor Hojo experiments upon him.

In Final Fantasy VII: Advent Children, Red XIII has a minor role. He first appears in the opening cinematic of the film, which is a computer-generated rendering of Final Fantasy VII's epilogue.

During the present, Red XIII joins the party in battling Bahamut SIN. Throughout the film, Cait Sith is seen riding on Red XIII's back rather than on an animatronic moogle like in Final Fantasy VII. Red XIII later appears in the ending, inside of the church with the other characters. Here, Red XIII comments how there are still children who have Geostigma.

In Dirge of Cerberus: Final Fantasy VII, Red XIII makes a very brief appearance. Unlike the other party members, who appear earlier on to help Vincent, Red XIII only appears in a small scene after the credits, lying next to Shelke outside of 7th Heaven.

Red XIII is strong at both physical and magical combat. He can be equipped with various headdresses to improve his fighting ability, and Red XIII joins the party with the Mythril Clip equipped.

Red XIII can use the following Limit Breaks:

"Just as his name implies, he is an animal with fire-red fur. But under his fierce exterior is an intelligence surpassing that of any human's. His sharp claws and fangs make him good at close-range fighting, but other than that, not much is known about him. It's not even certain that "Red XIII" is his real name. A real enigma."