Difference between revisions of "Odin" 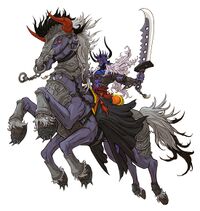 Odin is a powerful summon in the Final Fantasy franchise. He makes his first appearance in Final Fantasy III. Odin is based on the Norse God of the same name, and is usually seen riding a six-legged horse. Odin wears steel armor and a helmet that obscures his face and has horns protruding from it. Odin sometimes wears a cape, and he carries both a round shield and a scimitar, although in some games, Odin can also use a lance-type weapon named Gungnir. The color of Odin's horse varies between appearances, although it usually has red eyes.

In many games, Odin's ability is Zantetsuken, in which he slices through enemies with his sword, cleaving them in two and inflicting Instant Death upon them. Otherwise, if the enemy is invulnerable to Instant Death, Odin deals regular damage to them.

In Final Fantasy IV, the King of Baron becomes Odin after he is killed by Caignazzo. Odin is fought as a boss in the basement of Baron Castle after the party visits Feymarch and defeats both Leviathan and Asura. By defeating Odin, the party obtains him as a summon.

During a battle, Rydia can use 45 MP to summon Odin. When summoned, there is a chance that Odin might instantly defeat every enemy.

According to a book in the Eidolon Library, Odin was victorious and undefeated until he raised his sword in the air and got struck by lightning. This explains why Odin is weak to Lightning in his boss battle.

In Final Fantasy V, Odin is fought in the basement of Bal Castle. During the battle, the party has only one minute to defeat Odin or else he uses Zantetskuen to kill all of them. Once defeated, the party obtains Odin as a summon. Like other summons, Odin can be summoned by the Summoner class.

Summoning Odin costs 48 MP, slightly higher than in Final Fantasy IV. If summoned, Odin uses Zantetsuken to instantly kill every enemy, although if they are immune to Insant Death, Odin instead uses Gungnir, in which he throws a large Gungnir at every enemy.

Once the Odin magicite is equipped by a character, it costs them 70 MP to summon Odin once per battle. Like in Final Fantasy V, when Odin is summoned, he uses Zantetsuken to immediately kill every enemy. Odin teaches Meteor at a 1x rate to the character who has him equipped.

In Final Fantasy VII, Odin materia is found within the Shinra Mansion at Nibelheim. Whenever Odin is summoned, there are two attacks that he can use. His standard one is the Steel Bladed Sword, in which he slashes regular enemies in half while riding by. For strong enemies and bosses that are invulnerable to Death, Odin instead uses Gunge Lance, in which it throws his Gungnir skyward, followed by non-elemental damage to the enemy.

In Final Fantasy VIII, Odin is a non-controllable Guardian Force. Sometimes, when a battle is started, Odin may perform a preemptive strike on enemies with his Zantetsuken, instantly killing the enemies by slicing them in half. If acquired before the end of disc 3, Odin will appear in a battle with Seifer Almasy, the only time he appears in a boss battle. However, Seifer somehow manages to reverse the Zantetsuken and bisects Odin with his gunblade. The Zantetsuken is knocked from Odin's hand, and a mysterious hand reaches out of a portal to catch the blade. This is revealed to be Gilgamesh, who replaces Odin for the remainder of the game.

Odin in a CG rendered cutscene in Final Fantasy IX.

In Final Fantasy IX, Odin is one of the Eidolons. He is used by Queen Brahne after she extracts Princess Garnet's eidolons from her to destroy Cleyra Settlement. Garnet can gain the ability to summon Odin through the item Dark Matter. As a summon, Odin performs his Zantetsuken in the same way he had in previous games, destroying enemies outright. However, if Garnet has the Odin's Sword ability equipped, the Zantetsuken damages enemies that it does not defeat outright.

Names in other languages