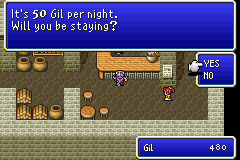 Cecil is asked to pay 50 gil to stay at Baron's Inn in Final Fantasy IV Advance.

Inns are resting areas that appear in nearly every Final Fantasy game. They first appear in Final Fantasy. In the games, the party can rest at an Inn for a night if they pay a small amount of gil. By doing so, all of their HP and MP are restored when they wake up the next morning. Sometimes in their journey, the party rests in a location that has beds and, although these places are not an inn, they serve the same purpose as one. There is an Inn in nearly every town, and some of them share a building with another business, such as a pub or an Item Shop. The cost for staying at an Inn is usually different in each area.

There are two items, Tents and Cottages, that have a similar purpose to Inns, as they can be used on the World Map to heal each party member's HP and MP.